A poorly designed and executed umbilicoplasty (belly button creation) can ruin the abdominal appearance after an abdominoplasty. Additionally, over tightening in the midline with internal sutures distorts the abdominal wall musculature by making the normally two distinct rectus abdominus muscles appear as only one muscle. This leads to a flat shapeless abdomen which is unattractive and looks unnatural. Dr. Leber spends additional time and effort with his umbilicoplasty and abdominal wall plication technique which preserves the central hollow between the rectus abdominus muscles and accentuates the natural “six pack” abdominal wall appearance. This is done by performing both vertical and horizontal abdominal wall plication (tightening with internal sutures) restoring optimal shape without distorting the natural abdominal contour. An obvious circular scar and over-sized belly button is a tell tail sign of an unattractive operated on look often seen with traditional abdominoplasty procedures. Pregnancy causes the umbilical stalk to elongate. Dr. Leber shortens the stalk, placing it very close to the abdominal wall and removes the fat just above its insertion. This draws the incision (scar) inward when insetting the belly button and creates a supra-umbilical hollow. With Dr. Leber’s technique including special attention to the belly button along with his abdominal wall plication technique, he restores a very natural toned abdominal appearance often simulating a “six pack”, with a natural appearing belly button and well concealed scars. His patients can’t wait to show off their new body at the beach or by the pool side wearing their two-piece bikini. “Beauty is in the Detail.” 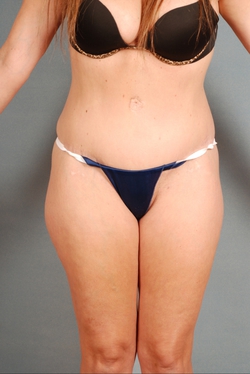 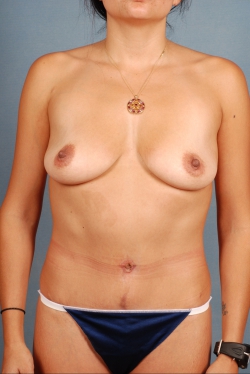